DPF’s post on GST and inflation reminded me of this photo I took early 2008.

I usually buy the generic brand (they do all come from the same factory after all) and that’s currently around the $9 mark. 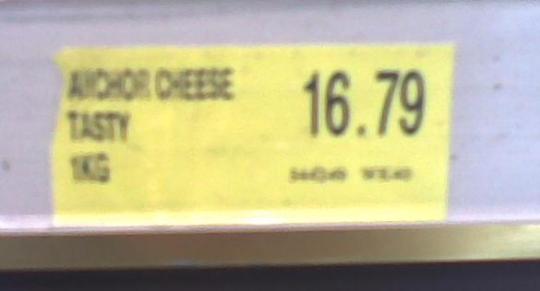 I do think however that raising GST is absolutely, unequivocally, stupid.

It gives the “National Hates The Poor” crowd a big, fat platformto stand on, and with all the tinkering that’s going to be put in to make sure that it doesn’t affect those on low incomes you might as well have just left it alone in the first place.

My preference is to cut out Labour’s more blatant “we’ve lots of money and want to return to power” bribes like Working for Families and interest free student loans and use that money to cut GST altogether. That would lead to a massive decrease in bureaucracy in both government and business.

Not that that’d be an easier sell…

Update: Well. Back at the supermarket today and cheese had shot up by $2! In fact I think Anchor is only just below the price there. We paid almost as much for 700g today as we did last week for 1kg.

See the factory, it’s a once in a lifetime experience!