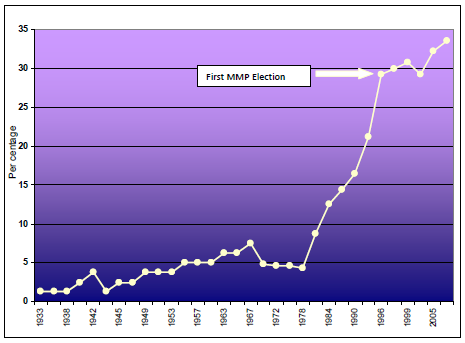 Up until 1981, you could generally count the number of women in the New Zealand Parliament at any one time on the fingers of one hand. Things began to change in the 80’s, with women’s representation rising to 10% of the House, and then 20% in 1993. MMP almost doubled that, and while the proportion of female MPs slipped in 2002 (thanks to NZ First and United Future), it has generally stayed above 30%. This is not a change that would have happened under FPP – the data on electorate MPs shows that. MMP has meant a significant advance for women’s representation, with a consequent flow-on effect on policy. We have MMP to thank for paid parental leave, flexible working hours, the families and children’s commissioners, and the anti-smacking law. And these are policies the suffragettes would have been proud of.

Um, sorry. What I see in that graph is this. 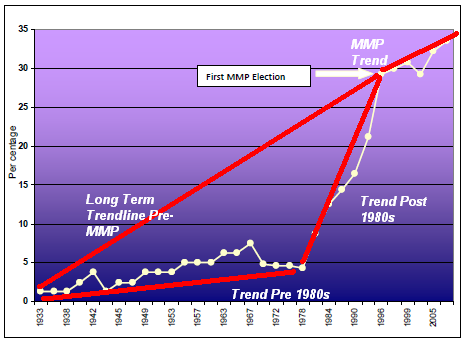 Pre the 1980s, clearly there was an upward trend for many years followed by some stagnation. But after 1978, numbers of women MPs shot up from 5% to 22%.

After the first MMP election however, something strange happened. The improvement has been much slower. Slower than the pre-MMP, and vastly slower than the 80’s and early 90’s trend. So things are getting better, but slowly – that’s point 1.

Now, think about this. Those big gains were made when all MPs were electorate MPs. What does I/S say? “This is not a change that would have happened under FPP – the data on electorate MPs shows that.” So under MMP Idiot himself acknowledges that electorates have not been won by women in the upward trend we saw before MMP.

There’s another, very obvious conclusion that can be taken from exactly the same data. MMP has meant that parties don’t need to take seriously the idea of equality anymore. Why bother to get a wide range of candidates in seats when you can just promote them in the list? That to me is a should be listed as a negative.

So is MMP really better for women’s representation in parliament? I see a reduction in the rate of increase that could hardly be more clear, plus a change in behaviour in that women are pushed from electorates into the list.

Is that really progress?