Looks like VSM is going through, so I thought I’d be helpful and use the OUSA budget (on their web site) as an example of where cost savings can be made. 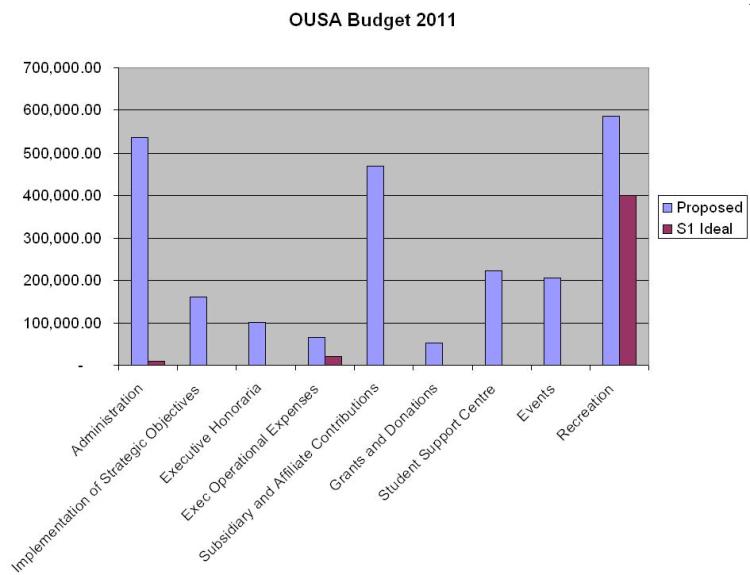 Let’s just go through the numbers, shall we?

Wow, $500,000 where does all that go? Staff wages and consultants mainly. Neither are needed if the association shrinks to the levels claimed. The front desk can be staffed by exec members, and OUSA has plenty of former members who can do auditing and legal work for a minimal cost, and it wouldn’t hurt to spend less time in court.

“Brand Awareness and Marketing” – Are you kidding? Cut completely.

Cut completely – let them do it on a voluntary basis.

Sorry, subsidising other organisations isn’t the role of a voluntary association. Those organisations will need to operate on the same basis as everyone else – you want to join, you pay.

Again, are you kidding me?

Have no idea what this is. It certainly wasn’t there when VSM was first mooted so it’s clearly not necessary since students survived without one for so long.

There is no need to subsidise orientation – ever. Make the costs fit within ticket prices.

Finally, some actual services. We can cut some of this, since with fewer members we won’t have as many expenses. $400,000 should be more than enough. I suspect however, that there are significant savings to be made even here, for example cooperating with the universities’ Recreation Services again. (Gee, did I just point out that the University already provides recreation services, even under CSM? Oops!)

By my calculations, OUSA could run their entire operation next year on about $420,000. At $100 each (which is a cut on the existing fee) they need a mere 4,000 members. I’m sure a bit of sponsorship (such as WSU’s free t-shirts) here and there would yield even greater cost savings.