Oh boy, Jacqueline Sperling does not like the fact that her victims refuse to be beaten down.

Three weeks after Judge Harvey’s ruling –  two Lawyers, and an Accountant are still unable to get it. 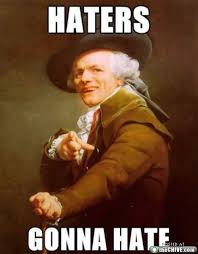 Translation: “Why can’t the victims of my harassment get over it? I have.” She is nothing if not generous, no?

While it is very difficult to read outright lies about myself and my behaviour on the internet – and to the best of my ability i avoid reading the lies that they and their sock puppets are publishing anywhere and everywhere that will allow it  – i find it unbelievable that these women are still running around the internet obsessing over me.

This is from a woman who, according to Judge Harvey, was the perpetrator of an online bullying campaign.

She refuses to acknowledge that, while the judge refused to grant a restraining order, he still stated very clearly that she was the harasser, she is the one with an obsession. In fact her problem is so bad, that she’s about to lose one person who is prepared to publicly defend her after reading the full decision.

Later in comments she says:

Freedom of speech – most importantly – applies to speech we don’t like.

I guess the difference here is that they are dishonest. The absolute outright lies suck but like i said – they can spread those until the day they die – it just makes them look worse.

Note she’s failed to actually name a single lie, while telling several herself.

They are spitting tacks at Judge Harvey’s decision. A lawyer being “reasonably happy” at losing a case like this is

a hilarious comment. Their behaviour – and the behaviour of their sock puppets – since Judge Harvey’s decision has shown just how much they are stewing over losing.

There are two problems with this.

1. Go read the judgement. Seriously. There’s paragraph after paragraph about how Sperling claimed victimhood while making nasty, lying attacks. The judge rejected all that. One reason the case was dismissed was because Madeleine’s employer worked out that Sperling was crazy – I’m told mostly thanks to Sperling’s vitriol after being served with legal papers.

I’d love to think by “sock puppet” she means that I am Madeleine Flannagan. That would be a massive hoot**. But in reality she’s throwing around terms that she hasn’t bothered to look up.

(Oh yea, and what’s with people who think I might be female? It’s not like my wife used to blog here or anything!)

Before I carry onto the next paragraph, I must also comment on the phrase “since Judge Harvey’s decision”. Some of us respect the courts enough to wait until the court has has it’s say. If that means that a lot gets said afterwards, so be it.

She/they aren’t “reasonably happy” at all – that was just another of her lies.

If it’s anything like her other “lies” then it’s probably true!

“Reasonably happy” isn’t hard to imagine when your adversary has had The Narrative knocked for 6. All that’s required now is an appeal against the mistakes that the judge made. And no, I’m not going to bash the judge here or anywhere else.

She will have no respect from her peers after this fiasco – nor does she deserve it.

Sperling has gotten so lost in her nastiness that she forgets a couple of things:

How does having an obsessive hater stalking you online hurt your reputation? It’s actually quite the win in some ways!

Finally, Sperling forgets that she herself is going to have professional peers in a few years.

I’m not a professionally trained counselor myself. But of the very little I know about counselling as a profession, there’s one thing I do know – mocking named rape victims in public is just a little frowned-upon.

* Just because you don’t know anything about the guy behind the handle doesn’t mean no one does.

This post is about Jacqueline (Jackie) Sperling, and is part of an ongoing series discussing her ongoing campaign of harassment and lies against lawyer Madeleine Flannagan and Ms Brown, and The Narrative – the alternate reality she presents on her blog in which she pretends to be the victim of her targets. You can read a court decision that outlines her campaign and the court’s assessment of The Narrative here.

Please do not place abusive comments on her blog, phone her, or approach her or her family as she will blame this on her victims.