Archive for the ‘Winston First’ Category

Some see a call for a better country.

I see a call for mental health funding! 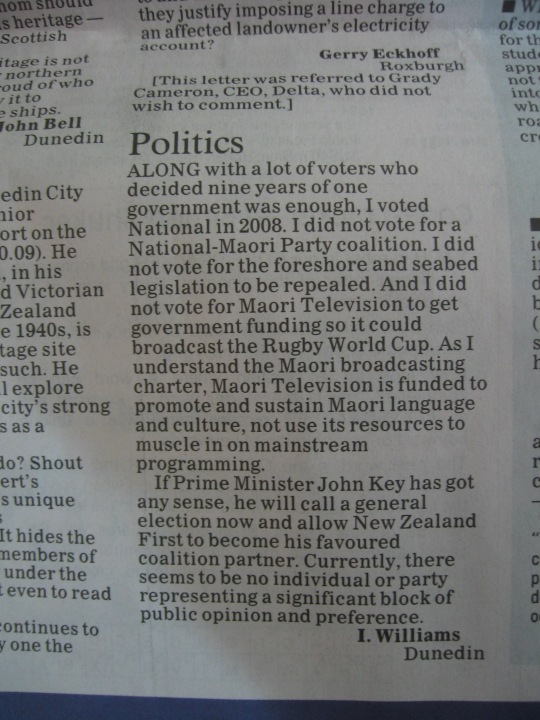 Up to the final paragraph, he was merely “out of touch”.

With the last one, he added “with reality”!

Before we make a new beginning we want to use the hardest word in the English language – SORRY,” Mr Peters is reported to have said.”We acknowledge that we made mistakes. In keeping out eyes on the big picture, we failed to appreciate the importance of the details.

No, no such luck.

“We allowed our opponents to create a perception of wrongdoing, when in fact, no offences were committed. This will not happen again.”

Mr Peters spent most of 2008 defending revelations that his party had channelled large donations through secret trusts to avoid disclosure.

In other words, he’s appologised for looking so guilty that he could no longer spin his way out of the situation.

That sort of happens when you lie a lot.

Homepaddock points out that Winston is avoiding Radio NZ.

I can think of several reasons why that might be.

1. He prefers TV, where he can play off the visuals, and his looks.
2. He doesn’t like the harder questions that Radio NZ can pose.
3. He lied about not wanting the vote of morons. Like it or not, Radio NZ attracts the most intelligent breakfast radio audience, including yours truly.

The Winston headline that he was let off by the electoral commission has been all over the radio this morning, but reading kiwiblog, it looks like the detail is more damming but has not been released.

The fact remains however, that Winston knowingly received donations from a trust he stated clearly did not exist, that he did know existed, of the type he had spoken out against loudly and often.

The man is a hypocrite, and corrupt. This ruling changes nothing of that.

Meanwhile Act get pinged for not declaring the discounted use of an office that was never used for campaigning. Hardly the same thing but you’d never know it if you only listened to Morning Report.

DPF on the SFO Outcome

If you read no other post today, read what Kiwiblog has to say about the SFO’s report.

NZ First’s failure to obey the electoral laws of New Zealand is what made the investigation occur. Because the public facts were that Bob Jones had stated he had made a $25,000 donation intended for NZ First, through the Spencer Trust, and the NZ First Party had filed a donations return saying it had not received any donations in 2005 of over $10,000. To quote the SFO:

There were two competing explanations for how this could be.

No 2 was always far more likely. And thanks to the SFO investigation we now know this is true. In fact we know that NZ First has filed a series of false returns, as has Winston Peters personally, and Peters has lied on multiple occassions about these returns, including giving false information to the Privileges Committee.

This is no case of an accidential omission on a return, due to Mrs Muggins the branch secretary. This was a strategy signed off by the Leader….

If you can find a clearer explanation that than, I’d love to see it.

As I said last night, Winston has only himself to blame for all this, because of his efforts to hide how his party was actually funded, his own donors realised that their donations may have gone astray and so complained.

In other words, his lies caught up with him.

There is no way that he should be going around claiming that he is exonorated. He is absolutely not, in the same way that David Parker was not. But like Parker, because one possibility has been proven false, few are looking too hard at the other possibility, which thanks to that proof has become a certainty.

Heh, gotta love what Hooton has to say though:

On this finding, the Prime Minister should re-instate Mr Peters as Foreign Minister and Minister for Racing.  She has said before that it was only the SFO investigation that led to his suspension, not any of the other matters.  This makes sense because of course her own Labour Party is a regular offender against the Electoral Act so she can hardly say Mr Peters cannot be part of her Government on those grounds alone.

Winston Let Off By SFO

Hm, the SFO says there was no fraud in the whole Spenser Trust arrangement, but that he might have broken other laws. Well, we knew that already – he’s been censured after all.

He’s trying to blame this on Hide,

“The only complainant in this sorry episode was a sad little man in a yellow coat, so desperate for attention that he used a tawdry stunt to tie up the resources of an agency that should have been investigating serious corporate crime,” Mr Peters said.

but the fact remains that his own donor was the one who ratted him out after his attempts to cover up the existence of the Spenser trust.

That would be one of those big business donors that New Zealand First never had.

That would be the secret trust that New Zealand First never had.

Oh, and not to mention the Glenn donation that didn’t exist, and the even at which he thanked Glenn, which he didn’t go to.

So, outside about a dozen blatant lies, and breaches of the cabinet manual, and gross hypocrisy, it’s all above board in Camp Winston.

Oh, yea Winston was Censured and they tried to bully the Maori Party

Just so my readers aren’t totally out of the loop, Winston was censured last night but remains a minister without warrants (so much for the PM waiting on the Privileges Committee process).

The Maori Party have reported that someone (they’re not saying who exactly) tried to heavy them.

“An attack on our credibility over this issue by Winston is totally out of order, and without any substance at all,” said Dr Sharples. “The Maori Party values its political integrity and has spent three years in the house – walking our talk.
Dr Sharples said he was not only taken aback by the personal attack from Winston Peters, but was disappointed at the personal lobbying by a NZ First staffer and a government Minister over the past weekend to influence the Maori Party’s decision prior to the vote.
“I personally had two separate phone calls from a senior Minister urging me to vote in favour of Winston, and suggesting that there would be unpleasant repercussions from Maori people if I didn’t. Both Tariana Turia and myself were disgusted with this kind of activity, aimed at perverting the course of justice and fair play.
“But one thing Winston Peters said is right, and that is – the people will decide on November 8. His populist antics versus our integrity,” said Dr Sharples.

Funny thing was that on the radio this morning, he was forced to admit that Peter Dunne made his decision with integrity. The great thing about MMP is that there were about 6 or so parties around that table, all with different agendas, and only the two with an interest voted against – there was no National/Act conspiracy.

Oh, and the complaint they got him on was from Gordon Copeland, not Rodney Hide’s.

So that’s one of the three decided. Now we wait for the SFO and Police investigations. I’m picking a clean sweep of “guilty” verdicts myself.

It’s now officially government policy that lying to New Zealand and to Parliament is acceptable, and is not, to use Helen Clark’s words, a “hanging offence”. You don’t believe me? Read Michael Cullen’s comments from Stuff:

A low point indeed. Parliment has been bought so low for so long now it’s hard to remember when they they actually enforced standards of behaviour and integrity.

(Short story: if you read no other posts this week, read this from Hooton)

I initially didn’t think much of the comment moderation over at what is now Chris Trotter and Matthew Hooton’s blog, but once Matthew came on board, it put it in a different context. In fact, it’s quite good to ahve a blog that tries to keep a higher standard of comments.

Most people now understand that. Not all though…

What is it with lefties and the word “rant”? They seem attach it to every single thing they disagree with, no matter how thoughtful and considered.

…  In 1996, Peters had attacked the Bolger Government, the Reserve Bank and the Reserve Bank Act, saying they were doing untold harm to New Zealand.  He had ideas about how the operation of monetary policy could be changed in New Zealand that he took on the campaign trail.  I am told that, soon after Peters’ appointment as Treasurer, then Reserve Bank Governor Don Brash met with his new boss and said he had read New Zealand First’s manifesto and speeches and, assuming Peters was serious, wanted to set up a process to review the RBA and the operation of monetary policy in New Zealand.  My source (and you can guess who it may be) said that Peters replied: “Don’t worry about all that.  The next election is three years away.”

I find that sick.  It later had very important implications.

As close followers of politics will know, a National/ACT/United Future/Maori Party/NZ First Government was a mathematical possibility after the last election.  The way I understand things, National, ACT, United Future and the Maori Party all agreed on basic terms about how such a government would operate, and the other party leaders told Brash to get in touch with Peters to discuss it.  Brash never did, and the other party leaders were perplexed.

The reason, as I understand it, is that Brash had been so sickened by Peters’ cynicism from the time Brash was Governor and Peters was Treasurer that he simply did not want to deal with him directly, despite it being the difference between government and opposition.  Instead, letters written by Peter Dunne’s Chief of Staff (and former Bolger Chief of Staff) Rob Eaddy were sent.

I got Je Lan Brash on side but Don chose the Peter Keenan draft, and, politically, that was the right call.  In a sense, it was fair enough for Keenan to call me, as reported in “The Hollow Men” “an idiot”.

Nevertheless, I caused a bit of a fuss.  I had paid for a table for 10 at the Orewa speech.  Ironically, I had invited Diane and Bill Foreman to join my table.  When it was confirmed to me that Brash was going with the Keenan speech I cancelled my table.  Lockwood tells me there was a gap, which he – as local MP – was embarrassed about, but which I am quietly proud of.

…they claim that Hooton was involved in the Brash Orewa speech, which is false.

Owen Glenn’s assistant is prepared to back his word.

The “he said vs he said” argument for inaction is quickly becoming obsolete.

Actually, when you count Winston’s own words he’s contradicted himself so that is really 4 against 1.