Quote of the Day

Had I just gazed the world through my Twitter feed, I would think Chick-fil-A was on the verge of bankruptcy. . . and also that Ron Paul was president, gay marriage was legal, and President Obama didn’t have a decent chance of losing the election.”

For those who don’t get the joke, Chick-fil-A is doing record sales thanks to the response to the torrent of hatred they’ve received from those who regard opposition to their agenda as… hate.

And don’t get me started on Ron Paul supporters. Ugh.

Blogging would be heavier but I’m working on a rather lengthy post which has taken up a lot of my spare time. 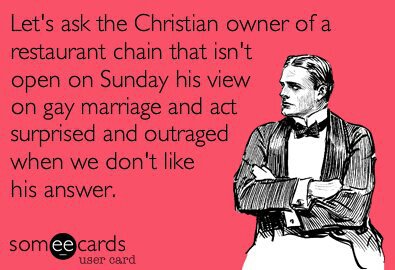